‘The process of writing a novel is like taking a journey by boat. You have to continually set yourself on course. If you get distracted or allow yourself to drift, you will never make it to the destination. It's not like highly defined train tracks or a highway; this is a path that you are creating discovering. The journey is your narrative. Keep to it and there will be a tale told.’  Walter Mosley.

On a lilac-skied Liverpool evening, I was lucky enough to find myself on the guest list for Walter Mosley's interview and reading at the town hall, the final event of Writing on the Wall’s 2015 festival, which also featured as part of Culture Liverpool’s One Magnificent City celebrations. As I walked down the streets that paved the way from James Street Station, I found myself staring at a veritable banquet of architecture. I saw the high reaching collection of steeples and domes that was the Liver Building, fortified behind the rows of shops, offices and apartments that populate Liverpool's skyline.

This grand and cultural aesthetic was an unfortunate contrast to the great brown monstrosity to my right which I found myself overtly wrinkling my nose at. I am of course referring to the Liverpool Crown Court, a building which I often make an effort to obscure from my vision as I walk by. However, as I slowly turned the corner into High Street, the grandeur of the Liver Building and the rather large short-comings of the Court were all extinguished by what I saw waiting for me.
The Liverpool town hall was brick for brick the typical image of a mayoral building, with its engraved pillars, wide windows and a huge lead dome, sporting a truly incredible statue of the Roman Goddess Minerva, arms raised as if to welcome Mosley to Liverpool.

The interior suffered from no drop in its visual quality. As I walked along its entrance corridor, I found an awed gasp escaping my lips. Once standing in the lobby with the other visitors, I caught a glimpse of a mural in the upper right corner. It seemed to be a memorial of some sorts for Liverpool's young men who died in the First World War. However, then I noticed another mural to its right, also a memorial. Indeed, I then realised that every wall was sporting a commemorative war canvas. Regardless of my personal views on the glorification of war, I couldn't help but be astonished at the detail, colouring and pure quality of these designs. How I hadn't noticed them beforehand I don't know, but what I do know is that when I did see them, the only word I could fathom was ‘Wow’. However, I had no time to stand around appreciating my surroundings as I and the eager Mosley fans I found myself with were rushed into the rather spectacular council chambers, complete with red fabric seating and gilded chandeliers. 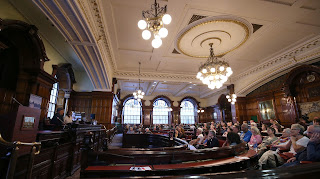 There was excited discussion throughout the room amongst these long-time followers of Walter Mosley, and I found myself feeling rather isolated. I had never read any of his works and so I felt curiosity and strangely a little nervousness at seeing and listening to the man about whom I had heard so much. Soon however, the chatter went silent and every pair of eyebrows in the room raised a little in excitement. I turned to see my work colleague, Writing on the Wall co-director Madeline Heneghan standing in the doorway, in front of two gentlemen. The first, Pete Kalu, a published author and playwright, and the second, the man we had all come to see, Walter Mosley.

As the announcer heralded their arrival, the crowd began to applaud enthusiastically and provided an entrance that Madeline described as ‘the grandest entrance to an event we've ever had at Writing on the Wall.’ We all eventually stopped our clapping and listened closely as Mr Mosley and Mr Kalu were introduced by Madeline, who then proceeded to sit amongst the audience as Mr Mosley began to speak. First, he began to tell us the comical origins behind his newest book entitled 'And sometimes I wonder about you,’ which he says was something his father used to say. This allowed him to briefly veer into describing his early life, before he moved onto the event we were all waiting for-his reading.

The scene he described to us was from his aforementioned new book, and featured a private detective sitting on a New York City train. The way Mosley writes is so fluid and alive, with no rigid structure or style. His descriptions of the various characters on the train are so full of life and vivid that it is as if you can see them with your own eyes. The huge man with the horseshoe chain around his neck, the dark, mysterious woman with the brilliant bronze-brown eyes, all these characters seem to ride out of the page on that wonderfully rich and detailed train. With its captivating lines: ‘She was beautiful. Her bright skin was the russet brown that I associated with the Caribbean, her hair untreated and a little wild.............she'd still be lovely when she reached the age of the sleeping man who muttered across the aisle,’ and it's sharp, intelligent dialogue ‘Wall Streeters are solitary sharks, Marella,’ I said, relishing the name. ‘Madison Avenue is populated by social animals - mostly wolves,’ Mosley's new book, and all of his writing, is of some of the highest standards I have ever had the privilege to experience. 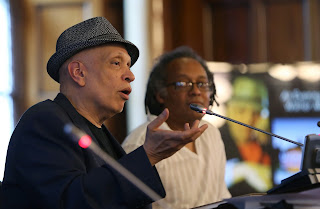 For a few minutes I felt a sense of disappointment that Walter had stopped reading, and was moving on to other things. I wished I could study and analyse each little detail of his work, in a manner similar to his story's inhabitants. However, my feelings of being cheated were soon dashed as the next section of Walter's talk began. Pete conducted an interview with Walter, who then gave several extended and thoughtful answers to the audience. Pete is currently doing his PHD, part of which is on Walter Mosley, so he was visibly and audibly delighted to be part of the interview. One of the first questions he asked was how Walter achieves such a flowing, rich texture to his writing. The entire audience eagerly anticipated this answer, and I recall seeing a few aspiring writers with their pens and writing pads out, taking notes. Walter told us that he writes his draft, then records himself reading it, and plays it back to himself. That way he can hear how the words actually sound, not just how he thinks they sound inside his head. This way, his writing eventually ends up sounding like actual speech, which is why it lends itself so well to being read aloud.

He also went on to speak about his parents, with a Jewish mother and an African American father, and also further about race in general, referencing the #BlackLivesMatter movement, police brutality and also the problems he faces with his work with publishers. He stated that when he tried to write about a black detective in one of his stories, his publisher turned away his manuscript because ‘there's already a black detective,’ and didn't change his mind, even when Mosley pointed out how many white fictional detectives there are. He also spoke about how his refusal to stick to one genre often puts him at odds with publishers. Walter criticised the system of capitalism and its effects on his work. He told us that ‘We live in capitalism, and capitalism is defined by the production line, and the production line is defined by specificity. If you see yourself as an artist, which I do, then you can't be limited by that. You can't let somebody tell you, 'Well, you can only draw this kind of picture or write that kind of book.’ 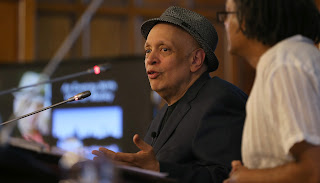 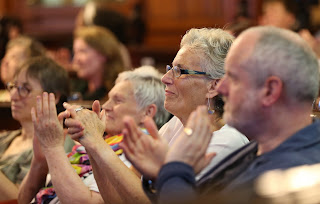 The genuinely entertaining interview continued for a good while, but the audience was so enraptured in every comedic and yet meaningful word that fell from his lips that we never felt the time go by. When Mr Mosely announced that he would now be taking questions from the audience, we knew the end was near, and we all felt a little sad. Walter's wit, charm and passion for his writing and beliefs had reeled us in, and we were not yet ready to be thrown back into the sea just yet. His genuine knowledge and wisdom shone through in his every answer, be it related to his work - speaking about writing scripts for stage and how he works with others as opposed to alone - or be it an unassociated subject, asked simply out of curiosity -  talking about his views on the rising popularity of television and the plummeting success of cinema. He spoke about his issues with publishers again, this time telling us that when he writes a book, he only receives fifteen percent of the profits as opposed to when he writes an E-book, he receives fifty percent. This tells us a great deal about the unfortunate greed of the publishing industry, in his experience at least.

Frank Baum, author of the Wonderful Wizard of Oz, said that ‘Everything has to come to an end, sometime.’ The same was true of our evening with Walter, and soon of this piece of writing. Yes, as strange as it may seem to you, the hands did eventually stop rising and the flowing stream of questions did eventually run dry. Somehow, it turned out that we had run overtime, and that we had to quickly wrap up. Madeline took to the stage of the council chambers and thanked us all for coming. She then proceeded to announce the winners of Writing on the Wall's 'Flash Fiction' short story competition: Joe Lavelle and Andrea Davies. Unfortunately only the former of whom was there, but he seemed absolutely delighted at the fact that he was presented both his certificate and a signed copy of ‘And Sometimes I Wonder About You,’ by Walter Mosley himself. 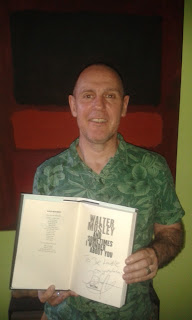 We all slowly began to file out of the room, feeling very positively about the whole experience. It had been a truly enjoyable evening, with the two huge personalities of Walter and Pete (whose contribution to the evening I have shamefully under-described) filling the room like Walter's characters filled the train carriage. As I walked out of the entrance, taking a moment to admire the displays yet again, I saw the previously lilac sky now a darkening shade of purple. Briskly I made my way to James Street Station with a smile not even the Crown Court's overbearing presence could diminish. Walter once said that ‘A man's bookcase will tell you everything you'll ever need to know about him.’ Well, if that is true, then I can safely say that you will soon be able to tell I like Walter Mosley.

Owen is on a two-week experience from his school with Writing on the Wall.